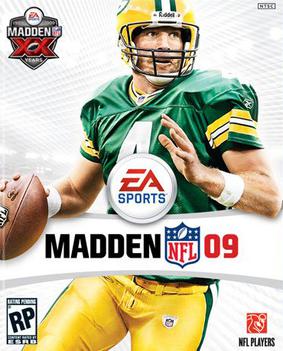 Disclaimer: I’m a longtime avid Madden player, and also a longtime avid complainer about things. I have a love/hate relationship with Madden NFL – it’s one of my all-time favorite games, but it also has a long history of sucking up cash from idiots like myself by providing only annual roster updates and dubious “innovations” (quarterback vision cone, anyone?) Many of my most important criticisms deal with the user interface and feature set on the PS3; I have only played the Playstation 3 edition of Madden 09, so some of these comments may not hold true on other platforms.

Now, to be fair – there are a lot of things I do like about Madden 09. Online leagues are a great – if much overdue – feature. The game does look exceedingly pretty, even if the crowd and sidelines are still wooden, and the game sits uncomfortably close to the “uncanny valley” of human models. The depth of football knowledge that the game’s makers expose is greater than ever before, and the franchise mode is very deep (although, do I really care about screwing fans with stadium concession prices if I’m not Dan Snyder?). Of course the core game on the field itself is still incredibly fun to play. So don’t take this rant to mean that I’m not going to play through at least one full franchise mode season as the Seahawksassuming it doesn’t crash again).

But I complain about Madden the same way I complain about Apple or the Star Wars franchise: as someone who likes the product so much that I’m a slave to buying it, but has a lot of discontent with the changes made to the product lately. EA, Steve Jobs and George Lucas are of course under no obligation to listen to me – they already have my money. And I am just some crank complaining on the Internets; it’s product sales that really talk. But when you care passionately about a product, you passionately care about wanting to make it better. I just wish that any of the above would display some sign of listening.